ultralight01 said:
I like my two stroke, but I like four strokes a little more.
But they're not as reliable or long-lasting in my opinion. We all know this, they need more maintenance and they will last, but for the kinds of speeds that I want to stay at (full throttle) for the amount of time I want to ride, I find a four stroke much more reliable. And it uses pump gas, you don't have to carry a bottle of oil to every gas station you stop by.

For this reason my next bike will have a 79cc predator. Admittedly two strokes have impressive power and a small size, that's why I love them. But I don't love having an engine blow up after revving it too high for too long.
Still really want a gp460 though. You can hardly get 16K rpm on a 4stroke. For that reason 2 strokes are great for racing for short periods.

I hate electric. Call me a global warmer, but I truly prefer being able to squirt in some gasoline vs charge your bike overnight or carry an extra battery. As soon as they find a way to recycle most of an electric motor's energy, I will likely not buy one because of cost and the facts mentioned.
Click to expand...

I agree with you about electrics. As for the longevity of two strokes, it all depends on how the two stroke is designed and its build quality; same as with a four stroke. A four stroke doesn't last long if run at maximum rpm for long periods of time, either.

Now, about that "pump gas" comment. I used to be averse to mixing up a special fuel blend too, but I've changed my outlook. Start with modern diesel fuel. What we are forced to buy from the pumps now is designed specifically to kill old-school, mechanically injected diesel engines. So for my old school diesels I have to mix my own fuel that won't harm them. In the process, I can make fuel that is even better than the old diesel was.
A similar situation exists with regular pump gasoline now. Modern cars are designed to deal with the deliberately low-quality and adulterated gasoline that is foisted off on us now. Carbureted engines aren't. That stuff is death on old-school carbureted car engines, and even more so on small engines. It's not good for even modern engines, but they are designed to put up with it so long as the car is driven regularly to keep a fresh supply of fuel running through it. That stuff is designed to kill old engines and engines in cars that don't get driven much, and to intentionally limit the life of small engines. Keynesian economics at its worst.
All that is to say, I don't run regular pump gas in my small four stroke engines either. I seek out good quality, non-ethanol gasoline and store it in 5-gallon cans for use in my motorcycles, motorized bikes, boat motors and other small and/or carbureted engines. Then I add oil to some of it as needed for my two stroke engines.
I've learned to embrace the concept of seeking out the best fuel for my engines, since I cannot rely on the normal supply chain to deliver fuel that won't kill my engines.

Yeah, I get all of my small engine gas from a specific station that has 100% non-ethanol. It's the best I can get in this small town.
5

Here it is, 7 years later. I still have Snow Tiger, my Diamondback Response MB. The powerful but unreliable GP460 engine has been replaced with a less powerful, super reliable 2.8hp Tanaka 47R powerplant and matching expansion pipe.

If and when they develop a reliable clutch for the 460 engine, I'd be willing to reinstall it into Snow Tiger.
Last edited: Apr 12, 2017
Reactions: chmn22s
K

oklahoma city,ok the cultural center of the univer

You can't judge 2-stroke engines by these Chinese low quality 2-strokes. I love 2-strokes and if the Japanese ever build one for bicycles I'll come right back. Right now my bike is powered by a 79cc HF engine that will do about 40 MPH though I have had it there only once. To scary, I keep it down to around 20-30 MPH normally. LOL,dogs love to chase me.

Kletus said:
You can't judge 2-stroke engines by these Chinese low quality 2-strokes. I love 2-strokes and if the Japanese ever build one for bicycles I'll come right back. Right now my bike is powered by a 79cc HF engine that will do about 40 MPH though I have had it there only once. To scary, I keep it down to around 20-30 MPH normally. LOL,dogs love to chase me.
Click to expand... My 79cc also tops out at around 40.
Reactions: Tom from Rubicon and chmn22s

If you need good gas you can find it at the local small airport. Mostly all they use now is called 100 LL for 100 octane low lead. It is designed for use in engines that were designed for 80 octane leaded and the 100 octane aircraft engines. Best thing is that is does not hold water like car gas can. Larry

msrfan said:
I started building DIY motored bicycles back in the 80's, way before Chinese kits were available. I was inspired by the Whizzer kits from the 30's and later. Using the most available engines, Briggs flat heads, and bikes, Schwinn cantilever, combined with easily and economically obtained moped hubs, tanks, forks and controls, I was able to replicate a Whizzer-like ride. After several successful builds, including most with 5hp motors and one with an 8hp, I had a good stable of transportation choices. I regularly went on the Whiz-In rides throughout the years, going 50 miles or so and found them to be completely reliable. 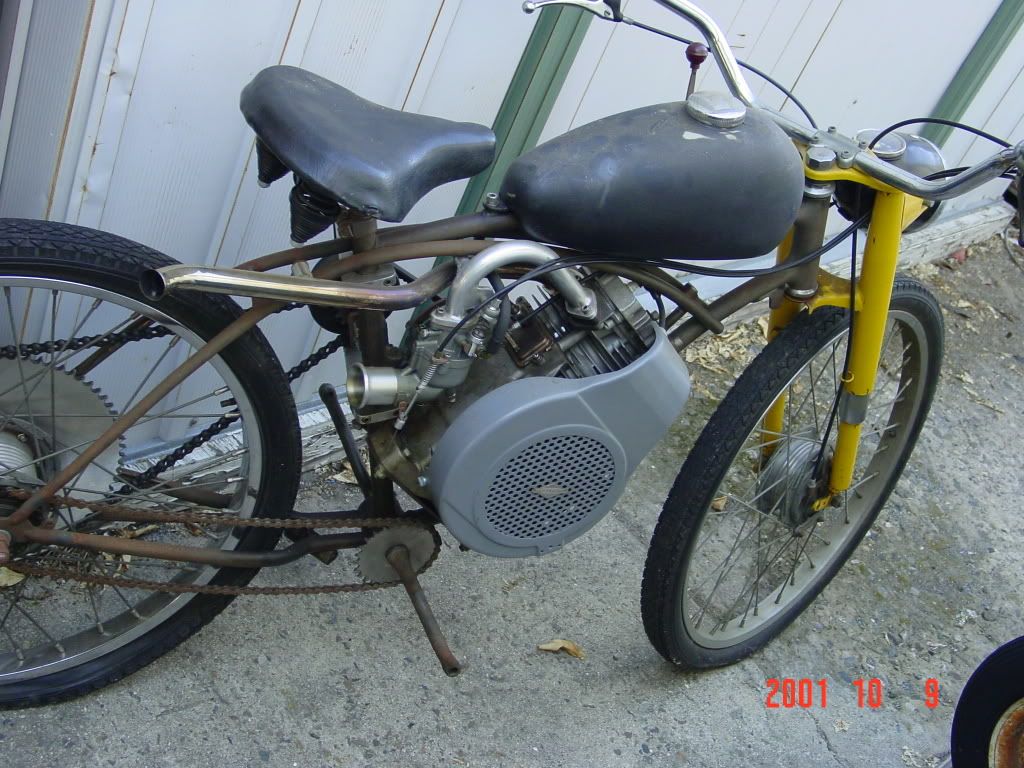 I was re-energized when the Chinese kits came about and wanted to start building more bikes. I've always been a huge 2-stroke fan while desert racing in the 70's and 80's. I built a half a dozen or so and sold them when you could make a few bucks. After getting some unbalanced motors, and with higher prices, I lost interest. I did learn to balance my own cranks though.
Then I met Neil and wanted to start racing, so I modified one of my old bikes with higher compression. My grandson and I came in 1st and 2nd at Willow Springs, but were obviously in the wrong class because we raced against stock 2 stroke kit bikes. Jeff already had a HF 4 stroke that smoked my bikes but he wasn't signed up for that race.
Since then, I've made a 2-speed automatic transmission for my race bike and recently added variable timing. Then I decided to make something totally different and put a back pack blower motor in a 24'' Schwinn with a go-kart clutch and homemade jack shaft. So I don't know where I'd be in this poll because I don't use any of the popular motors. I just know I'm having a ball and don't intend to quit building any time soon.
Click to expand...

Hi, I’m planning a 212cc predator build.
I don’t want it to be a pull start. I’d prefer it to be a pedal start. What is the best way to do this? A 3D manual clutch? Or some other option? Thanks!
M

3D would be a great choice. Their kit bolts right on and works very nice. Another option would be to make a kick starter similar to the one I just made for a Briggs motor.

msrfan said:
3D would be a great choice. Their kit bolts right on and works very nice. Another option would be to make a kick starter similar to the one I just made for a Briggs motor.
Click to expand...

Merry Christmas Dale,
Do you have a build thread on the Briggs kickstart? I would like to see that.

Thanks for helping out with that link Curt.

Gbrebes said:
Merry Christmas Dale,
Do you have a build thread on the Briggs kickstart? I would like to see that.

Gilbert, my kickstart design will work on any engine with the four threaded holes around the crank shaft. Still a lot of fabrication to do. Let me know if you decide to make one and I'll get a mounting plate made for you.
C

Yes! MARY CHRISTMAS TO ALL. Good one so far.
Click to expand...

I have all of the above, if I can count the hybrid under construction. Preferences?
My electric, Juiced Bikes CCS is a super commuter. My Tanaka/G.E.B.E. is a
dandy ATV. I've modified the gasser to the same 9 spd as the CCS, but
it has a triple ring in front for powerless pedaling. The Tanaka & tank discreetly covered in stealth mode. The CCS is just amazing for
asphalt & moderate distances, but the gasser will go anywhere.

In case anyone doesn't know, CL is:
CL
Chile

Rate it:
CL
Compile and Link

I'm glad you CLarified that for us.

Your quite welcome. Anytime I have the time. lol
L

Got me a 2stroke kit on some 6 yrs ago, finally got it on a bike after sitting for 5 of them yrs, Ok, Ok, Ok,, What a rush this little weapon is, on 23yr old mountain bike(my first), Pheonix, Ditchpig. This is a Hoot, I'm gonna kill myself lmao
Reactions: FOG
You must log in or register to reply here.
Share:
Facebook Twitter Reddit Pinterest Tumblr WhatsApp Email Link
Top Bottom